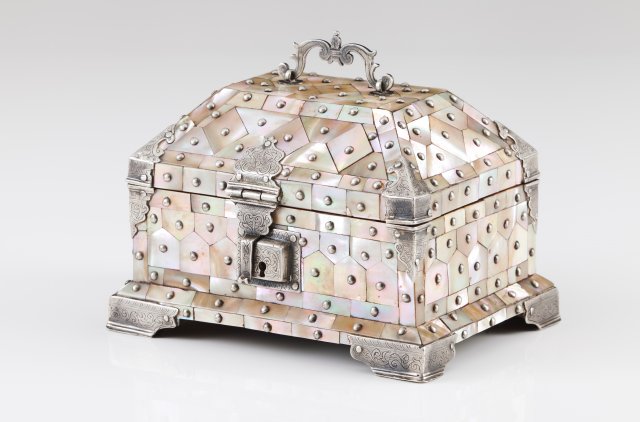 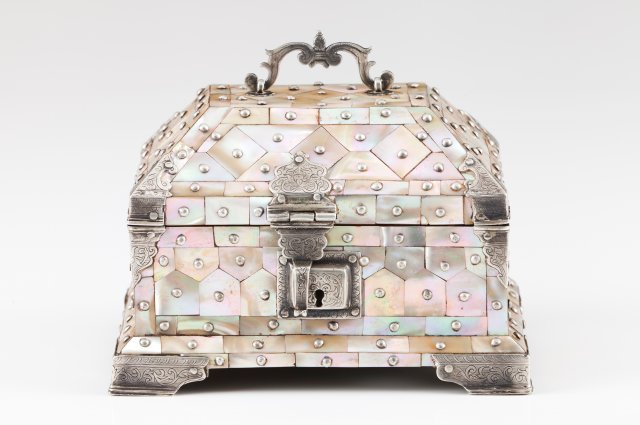 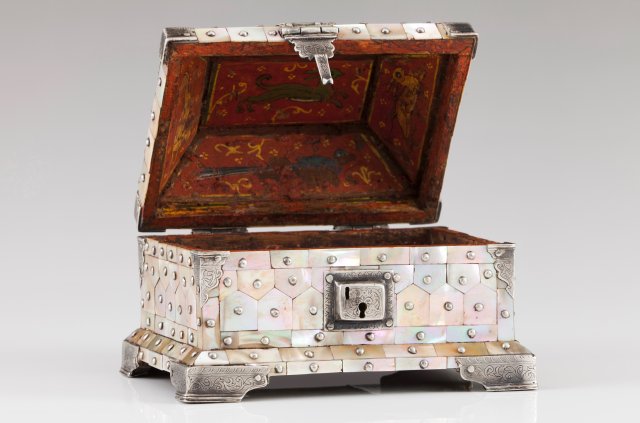 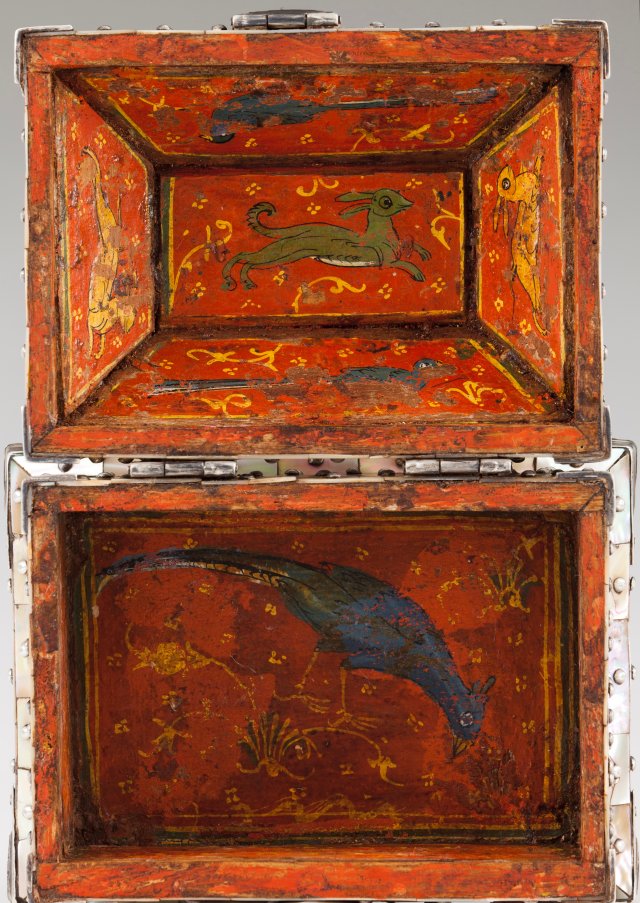 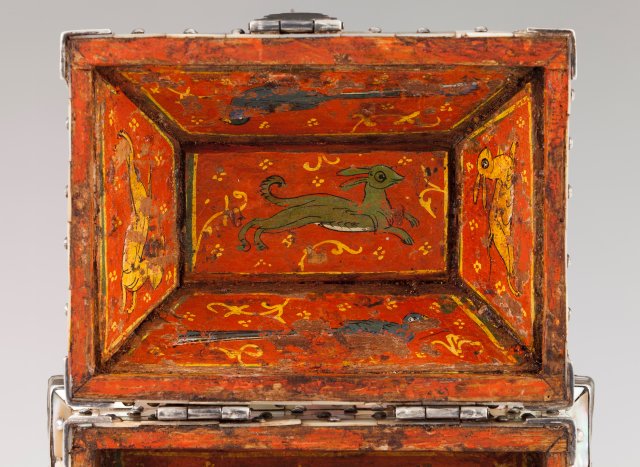 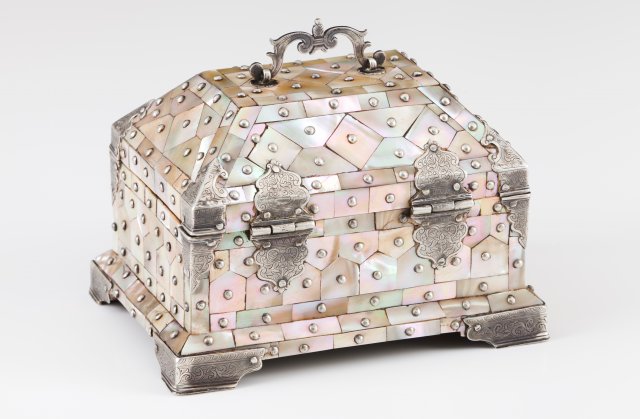 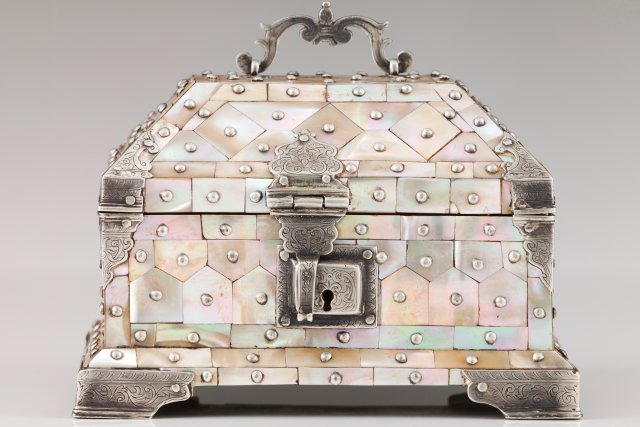 Rare and precious parallelepiped, teak miniature casket of truncated pyramidal lid, coated in mother-of-pearl (Turbo marmoratus) tessera, fixed to the wooden carcass by small silver tacks. The casket, elevated on a socket, sits on corner feet. The engraved gilt silver mounts dress the lid and case junction angles, and include the square box lock and latch and top handle.
The silver elements decorative language follows an erudite Mannerist repertoire of scrolls and “ferroneries”, characteristic of the mid 1500s. Their quality suggests a, most probably, Lisbon silversmithing workshop from the second-half of the 16th century.
Both the shape and the whole decorative composition of the silver components, seem almost to be a reduced version of another Gujarati casket (16 x 24,6 x 16,1 cm) that we have recently described (Crespo 2019, pp. 240-243, cat. 30), differing solely in the least accomplished interpretation and transfer, by the silversmith, of the Mannerist motifs into a smaller surface. That fact is evident in the decorative detail and the lined background, over which the design looses contrast. Additionally it is also noticeable some disproportion of the silver elements, relatively to the casket’s dimension, resulting in the apparently exaggerated size of the silver tacks enriching the iridescent surface, of the feet and of the top handle, whose form, albeit not identical to the larger casket, is of a similar type.
The Indian origin of this production, specifically from Cambay and Surat, both in Gujarat, has for the last 30 years been fully accepted and proved, both documentarily and in the literature, as well as by the known survival of wooden structures coated in mother-of-pearl tessera, as it is the case of the tomb baldachin of Sheikh Salim Christi (†1572), a Sufi Saint, at Fatehpur Sikri in Uttar Pradesh. It is indeed a production of geometric characteristics and Islamic decorative grammar, in which occasionally the mother-of-pearl tessera create intricate fish scale compositions or, similarly to the dishes produced under the same technique using fine brass sheets and tacks, stylised lotus flowers (see Ferrão 1990, pp. 114-122; Felgueiras 1996; e Sangl 2005). The shape of the present casket with its truncated pyramidal lid, similarly to other contemporary tortoiseshell examples, corresponds to an Islamic typology, adopted in the Indian subcontinent previous to the arrival of the Portuguese, that was inherited from the ancestral caskets used to store the Holy Buddhist texts (Crespo 2014, pp.65-69).
The most important detail of this casket however, is the sophisticated decoration of its inner surfaces (on a red background), as well as the remnants of decoration on its underside (on green). This decorative composition, a shellac solution mixed with bright coloured pigments, includes hares and birds on the inner lid surface, and another bird on the case ground which, similarly to the lid examples, can be identified as bulbul, a Pycnotidae family songbird, much appreciated in Gujarat, home territory to some of its species.
Outlined in broad black ink in a gracious and light style, the animals are depicted on a ground sprinkled with stylised flowers that seem to originate from Persian painting, in a style alluding to Indian painting on paper, as it was practised in some of the less sophisticated court workshops in the Sultanate of Gujarat.
This decorative grammar, and that of a writing case recently described, presents strong similarities to the well known Codex Casanatense 1889 - a manuscript that depicts the habits and attire of the various Asian peoples with which the Portuguese came into contact – which has recently been attributed to an early 16th century Sultanate workshop, possibly Malwa or Gujarat, and dated to the 1540s (see: Losty, 2012; for the manuscript facsimile see: Matos, 1985). Reinforcing the Gujarati origin and authenticity of this casket decorative composition, we can also refer the few surviving mother-of