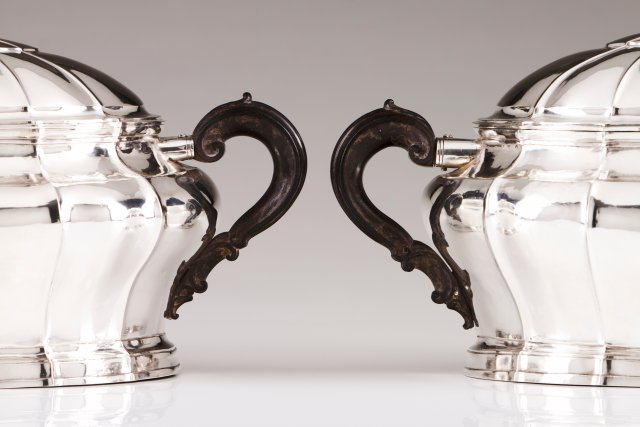 Casa da Ínsua, one of the most important and opulent Portuguese manor houses was totally rebuilt to its present shape during the 18th century by Luis d’Albuquerque de Melo Pereira e Cáceres (1739-1797), that between 1772 and 1788 had an important role as Governor and General Captain of the Mato Grosso Capitania. The library of Casa da Ínsua was one of the most important regarding 18th century Brazil.
The unusual fact of this pair of tureens remained in the same family since its commission until the late 20th century explains being unpublished and unseen in public until now.

Note:
Of absolute rarity this pair of tureens forms a unique set in the Brazilian and Portuguese silver production.
If silver tureens executed in Portugal or Portuguese territories during the 18th century are scarce, pairs of tureens are exponentially rarer. We only know one pair which belongs to the Medeiros e Almeida Museu in Lisboa; regarding this pair says Reynaldo dos Santos and Irene Quilhó: “this is the only pair of tureens of this time executed by the same silversmith that we are aware of; although there may be others are surely exceptions” in Ourivesaria Portuguesa nas Colecções Particulares, po. 39, il. 15.
Those tureens were executed by João Pinto Pereira in the last quarter of the 18th century but in the baroque/rococo aesthetics, a defining singularity of the Portuguese court taste at the time. Just under 30cm in length, the usual dimension for this kind of pieces, they differ a lot form the 48cm length of the ones now offered for sale.
Directly inspired by the Chinese export porcelain models, the tureens now offered stand out for its huge dimensions and weight, in an unapologetic subjugation of the functionality. This is a defining trait of the eighteenth century Brazilian silver (and not only silver) productions that invariably show this emphasis on size without losing any execution quality or design proportions,
During the 19th century, especially after Brazil’s Independence but still – and incomprehensibly – with some traces alive today, the Portuguese antique silver buyers look at the 18th century Brazilian productions with some reluctance, without any objective reason to do so. It is clear today that the roots of this movement are in the sense of loss and consequent reaction of the former capital after the definitive separation of the kingdoms.
The best Brazilian silver commissions of the reigns of D. João V (1706-1750) and D. José (1750-1777) are not only proof the enormous wealth of the territory in which they were created, of the extreme economic power which has always characterized the Brazilian elite, but also and extraordinary and rare testimony of the magnificence of the 18th century civil interiors.
Spared of the great Lisbon earthquake, of the furious French pillages of the early 19th century and of the civil war which have greatly impoverished the court treasures, the Brazilian preserved some unique testimonies of a common culture of a territory that for centuries shared not only the same language but the same crown.
It is with great pleasure that we offer these unparalleled pieces.
João Júlio Teixeira