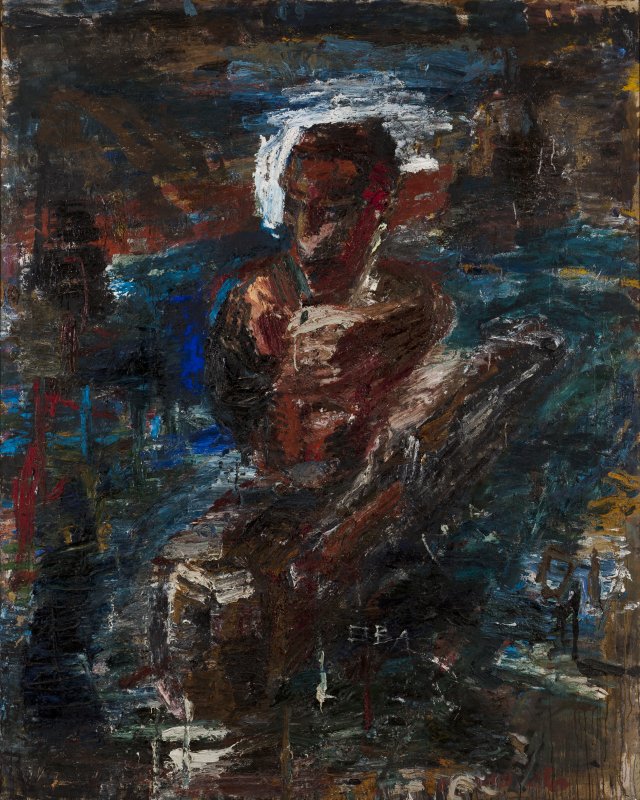 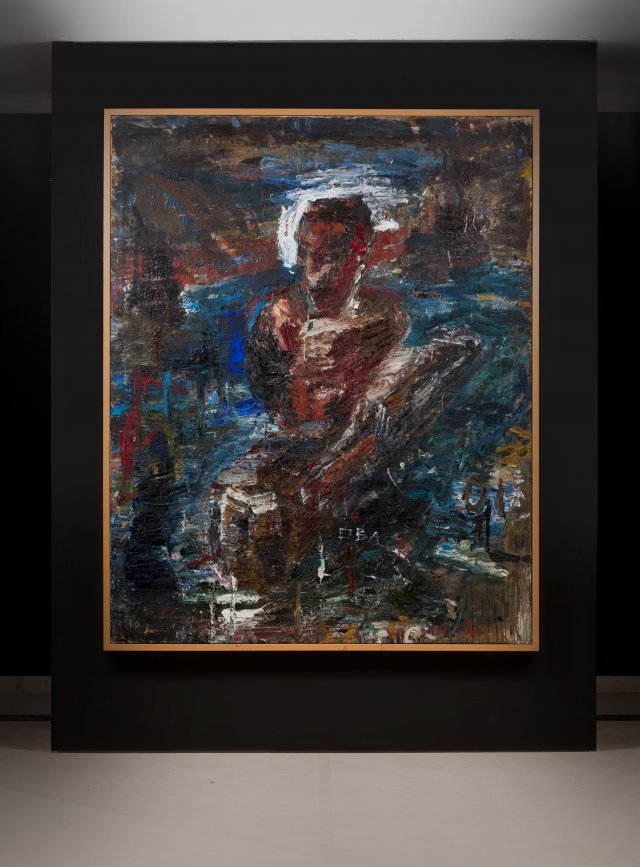 This work belongs to a group of three similar paintings showing logs floating in the current of a river and bearing the same generic title, “Camino del llamo”. One of them belongs to the collection of the Lembachhaus in Munich. The three paintings are also related to an earlier series from 1983, entitled “Los trabajos y los días. Las tentaciones del pintor”. They all have to do with local stories and legends from the Miera region in Cantabria. At this time, Uslé worked in this area in a very remote mill, under some high and steep rocks. The owner of the mill, or a nurse from the village, who visited him occasionally, would tell him different local stories. The place was isolated at the time, poorly served by bad roads, and life there was not easy. Many suicides were reported at the time, and there was frequent talk of incest. Uslé, meanwhile, had a very sharp axe, a gift from his father, with which he cut down fallen trees to make firewood, or to make small pieces of furniture, and he thinks that the aggressive brushstroke of these works may be related to his work with the axe, just as the subject of the works is related to his work with the axe. Uslé tells us that when he felled the fallen trees he carried the logs on his shoulder, but when they were too big he had to tie himself to them and control their descent by swimming down the river to the mill, so that they would not be carried away by the current; an activity that we can define as dangerous. Uslé once cut down an elm tree, the local name for a species of oak tree that is scarce in the area, and had a guilty conscience, for a while, for having cut it down, even though the tree looked sick. These paintings of logs refer to this autobiographical episode. The three paintings entitled “Camino del llamo” show a human log with a head, but no limbs, which is embedded or grafted perpendicularly into the trunk of a tree that we see floating in a swirling river. The image is painted with a certain roughness and clumsiness, imitating the energy of rivers, which are swift and leaping in their upper parts, before becoming wider and more serene in their lower parts. The way the painting is painted
is a metaphor for this idea. Volume, geometry and gesture are mixed together, united by the rapid way in which the paint has been applied. The resulting strange figure seems to emerge from the very magma of the painting, from matter in movement. The colours, moreover, are dissonant and expressive, with intense emerald greens, ultramarine blues and deep reds. Everything is ambiguous and rendered with few details. The head of the human trunk, for example, is placed on a white area, which could be either a halo or a representation of the foam caused by the river falls seen in from a distance. We also see a rocky landscape on the right, which is less insinuated on the left. The paintings in the previous series also showed logs, although the figures had arms, which emerged above the head.
The strange combination of the two logs in the three paintings in the “Camino del llamo” series suggests both unfinished wood carvings and broken toys. When they were painted in the mid-1980s, they were at the height of the Neo-Expressionist movement, and artists such as Anselm Kiefer and Georg Baselitz were receiving a great deal of critical attention. Baselitz, in addition to being a painter, is the author of wood sculptures carved with axes, although Uslé says that when he painted the paintings he was not thinking of these works. Shortly after painting these works of tree logs and troubled rivers, in 1987, Uslé moved to New York. There, he first painted a series of dark, rapturous and romantic landscapes that still refer to the lush Cantabrian countryside and to stories he had lived through there, like the memory of a great shipwreck. At the end of the eighties, little by little, Uslé's work became introspective and abstract. He then began to exhibit in numerous exhibitions on the new abstraction, in the early nineties, and from then on acquired great international recognition.