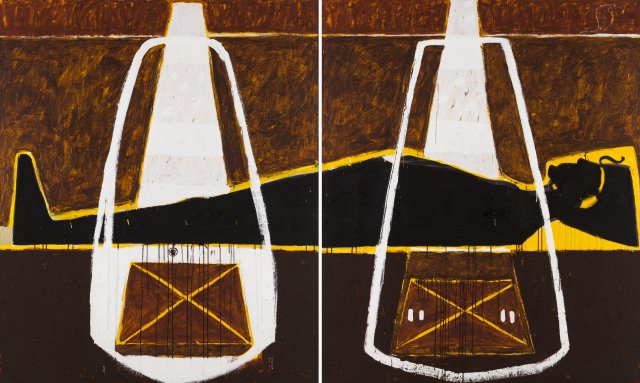 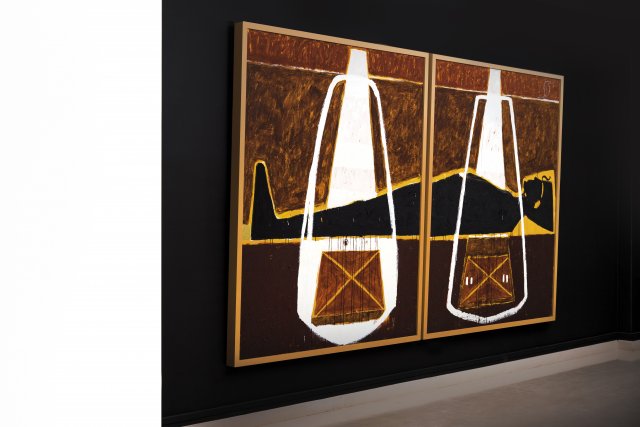 With label from Vrej Baghoomian Gallery, New York, on the reverse of both canvases.

“Samo the initiated” marks an important step in the life and career of Ouattara Watts. In two ways, this work symbolizes the passage of a being towards a future conceived as his return to his origins.
Literally, at first, as its title indicates, this painting is a tribute to another painter whom he saw as a kindred spirit. The story is known. In 1988, Ouattara Watts had been in France for a decade. He has developed a raw Expressionism, in the distant wake of the “Vohou-Vohou” movement and nourished by the trends he discovered in Europe: he uses recycled materials, paints on large tarpaulins of tents, makes his colors to find the appearance of traditional plaster of African architecture... At the beginning of January 1988, Jean-Michel Basquiat presented one of his last solo exhibitions at Yvon Lambert in Paris. Ouattara Watts attended the opening, his charisma caught the eye of the New Yorker who rushed to see his works. It is a friendly and artistic love at first sight.
In the following days, the two painters did not leave each other, visited Paris together, discussed painting, Europe, Africa and the Ivory Coast that Basquiat had visited in the fall of 1986, the United States and New York where he invited his new friend to come and live... Ouattara packed his bags, crossed the Atlantic and Basquiat became his guide in this new world: he introduced him to the New York Art scene, took him to New Orleans to listen to jazz and to discover the banks of the Mississippi, a high place of memory for him to evoke the stolen destiny of so many uprooted people. Together, they organized a trip to Africa where Basquiat hoped to recharge his batteries and free himself from his demons: unfortunately, these demons brutally took him away on August 12, 1988.
Symbolically, then, “Samo the initiated” was painted by Ouattara Watts as if to sublimate the mourning of his friend. It was like a magical operation, a rite infused with ancestral beliefs and echoes of the theories of Cheikh Anta Diop who died two years earlier. Indeed, it could not have slipped Ouattara's mind that the pseudonym found by Basquiat, SAMO, also corresponded to the name of a Mande people whose area of influence is close to the North of the Ivory Coast where he is originally from, and it is not insignificant that he drew his inspiration from Ancient Egypt.
In this large diptych, the deceased is a pharaoh, a man already deified in life and ready to complete his journey into a glorious afterlife. A yellow border indicates the sacred aura surrounding the body and suggests the gold of a sumptuous sarcophagus. The earthy ochre strata of the masonry background in the upper part of the painting fix the silhouette in the serenity of a here below that confers by contrast even more lightness to his soul on the verge of immortality. Two large white structures extend their arms towards the two sacred boxes placed under the silhouette and open luminous verticals towards the top of the painting, while black flows root the figure downwards. From the earth to the earth, for the body, and towards the cosmos for the spirit.
The work is signed on the reverse as if in a gilded cartouche and the many "8's" dating the canvas have been painted as symbols of time, a sort of hourglass frequently found in Ouattara Watts' signage repertoire. These are all clues to the holistic vision of the artist who tells in his own way the secrets of the Whole World of which he had found in Basquiat another initiate, he who declared: «I have a cultural memory. I don’t need to look for it; it exists. It’s over there, in Africa. That doesn’t mean that I have to go live there. Our cultural memory follows us everywhere, wherever you live » (“Interview by Démosthènes Davvetas”, in “Jordana Moore Saggese, The Jean-Michel Basquiat Reader. Writings, Interviews, and Critical Responses”, University of California Press, 2021, p. 62).