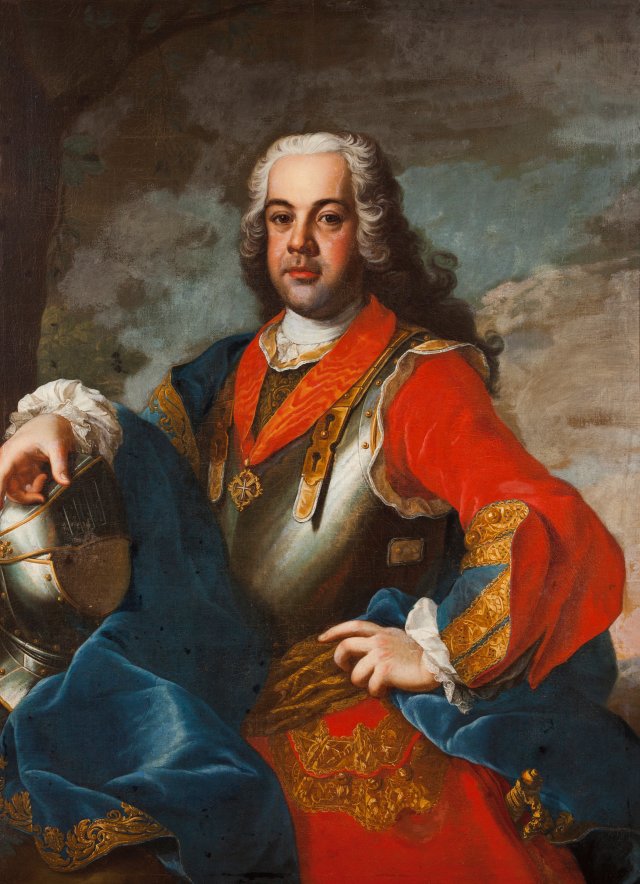 Coming from the circle of artists that surrounded the Duke of Savoy Vítor Amadeo II (1666-1730), Domenico Duprà was born in 1689 in the city of Turin, as the son of Giuseppe Duprà and Spirita Crossatti and the older brother of the painter Giuseppe Duprà (1703-1784). In 1709, when he reached the age of twenty, he moved to the city of Rome, with a certificate authenticated by Archbishop Miguel António Vibo, which testifies to his early relationship with the Portuguese circle. In that city he was a disciple of the Italian painter Francesco Trevisani (1656-1746) – author of the large canvas on the main altar of the Basilica of the Convent of Mafra – and it was in this workshop that he met Francisco Vieira Lusitano (1699-1783) who was in Rome as a boarder of King D. João V (1689-1750). In 1719, he was awarded the title of Academic of St. Lucas, which ensured the notoriety he enjoyed in the artistic society of that city. In that same year he arrived in Lisbon, following the invitation made by the 1st Marquis of Fonte, D. Rodrigo de Sá Almeida e Meneses (1676-1733) on behalf of the King D. João V. He arrived accompanied by the architect Filippo Juvarra (1688-1736) and the painter Vieira Lusitano, joining the Brotherhood of S. Lucas on October 22nd. From the records at the Brotherhood, we learn that he lived on the balconies of Terreiro do Paço, which means that he was nominated by D. João V as a Royal painter. Duprà's career in Portugal was almost exclusively dedicated to court painting. In 1719, he painted the portraits of the King's four sons and the portrait of the Monarch with the background of the Cape of Battle of Matapão (today in the collection of the National Museum of Ancient Art). In 1720, he began the cycle of celebration of the Dukes of Bragança, on the ceiling of the Tudescos room of the Paço Ducal in Vila Viçosa. These paintings, whose format adapts to the ceiling partitions, were made from pre-existing models, with three natural portraits (that of D. João V, Infanta D. Maria Bárbara, and the Prince D. José). This was followed, five years later, by the portrait of D. João V for the library of the University of Coimbra and those of the King's children, Infanta D. Maria Bárbara (1711-1758) and D. José Príncipe do Brasil (1714-1777), today in the Prado Museum and in the Palacio do Oriente, due to negotiations with the King of Spain for marriages with Spanish infants. In 1727, he painted the portrait of the 1st Duke of Cadaval. In Duprà's work we find the influence of painter Trevisani combined with French taste in the manner of painters such as Hyacinthe Rignaud (1659- 1743) and Jean-Marc Nattier (1685-1766), which opens a new phase in the portuguese court official portrait. In addition to portraiture, he dedicated himself to the elaboration of engravings and religious paintings. On this last theme there is a Blessed Christ, signed and dated (Dos. Dupra Pintor de Retratos de S. M. Portº o fez em Roma 1733) that was in the King D. Luís Painting Gallery in Ajuda Palace and that was lost in the fire of September 1974. In 1731, diplomatic relations with the Holy See is restored, and after eleven years working in Portugal, the painter returned to Rome and created the portrait of the new cardinal Vicenzo Bichi (known for the engraving by Rocco Pozzi) and another portrait of King D. João V. It was in this period (when it was cast in the context of Roman painting) that he began his relations with the house of the exiled Stuarts. It was in this period (when it was cast in the context of Roman painting) that he began his relations with the house of the exiled Stuarts. From then on, his orders to Portugal became part of a panorama of international orders and, in addition to the already mentioned, Christ lost in 1974, he made a portrait of Father Évora and a self-portrait, also acquired by D. João V. In the following years, there were no new Portuguese commissions, but it should be noted that his extensive production, not always datable with certainty, and sometimes attributed to his brother, is often identified by recorded reproductions. In 1750, he left Rome for Turin, where he was appointed painter at the court of King Charles Emanuel III of Sardinia (1701-1773) and ended up making a series of paintings of the royal house of Savoy, including the portraits of the Dukes of Savoy, Vítor Amadeu III (1726-1796) and his wife D. Maria Antonieta of Spain (1729-1785). The painter died in the city of Turin in the year 1770.

The iconography of the Infante

D. Francisco, Duke of Beja (1691-1742) The brother of King D. João V requires an in-depth study of his iconography. There are few portraits of him that are known. only one engraved and another identified by Professor Ayres de Carvalho, who is in the Palácio do Oriente, by Jean Ranc (1674-1735), made in 1739 on the occasion of the preparations for the episode of the exchange of princesses on the river Caia. It was through the comparative analysis of this painting, now brought to auction, with that one by Jean Ranc, that at the exhibition “JOANNI V MAGNIFICO: A pintura em Portugal ao tempo de D. João V” it was noticed the physiognomic characteristics of the infant are the same in the two paintings (the oval shape of the face, the same mouth, and the eyes). The good-natured look of the infant, as characterized in the respective catalogue, which appears in these portraits of D. Francisco hides the true personality of the ambitious Duke of Beja. And it is with a portrait painted by Duprà, when he was no longer in our country, that links are established with what is now up for auction. In 1745, when the painter was in Rome working for the exiled House of the Stuarts, he portrayed the pretender to the crown of England in full length. Unfortunately, the location of this painting is unknown, but the engraving opened by N.S.B. of Polly. The similarities in terms of composition and pose of the subjects stand out. The way the characters' left-hand rests on the waist, closing and leaving only the index finger to stand out, as well as the volumetry of the draperies and even the entire placement of the body facing the spectator, are strictly the same in the two portraits. If these common points do not exist, we could continue to attribute this portrait to Domenico Duprà due to the strong lighting effects that open his color palette and underline the vivid realism that seems to want to overcome the simple visuality in the detail of some physiognomic aspects which often led him to represent the dark shadow of clean-shaven male faces. A characteristic that in the 18th century was not much appreciated, but which the painter did not abdicate because he felt strongly linked to a commitment to fidelity to reality.