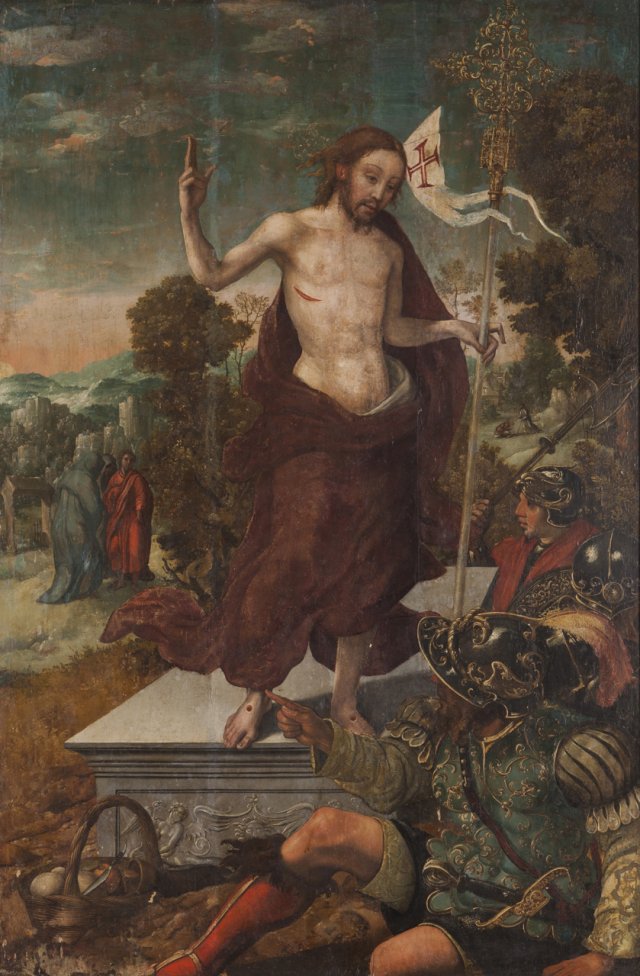 Oil on oak board

Note: This board is part of a tryptic of the Santa Maria de Almoster monastery. One of the boards is signed and dated.
Bibliography: Francisco Faria Paulino (coord.), "A Pintura Maneirista em Portugal - Arte no Tempo de Camões", pp. 195.

Is very likely that had been D. Gil Eanes da Costa that commissioned for his funerary chapel at Almoster an altarpiece to Diogo de Contreiras when in 1542 signed a contract with the nuns of the monastery to buy his funerary chapel and tomb. We know that the altarpiece painted by Contreiras between 1542-45 was still in its original place in 1949 once is described at the Artistic Inventory of Portugal for the Santarém district commissioned by the Academia Nacional de Belas Artes to Gustavo Matos Sequeira. Gil Eanes da Costa was a very well-known figure of 16th century Lisbon, his ability to save and earn money were legendary.

After being disinherited by his father he raised an immense fortune, some said to be even larger than that of the Country. But Costa didnt make splurge of his fortune; on the contrary his public behavior was commented, for example one day being working at the public treasury he asked if his mule had already arrived to take him back home, someone said no and he replied that the animal should probably still working transporting firewood. To a nobleman of that time to ride a mule was already unusual and even more if that same animal served for domestic works. Austerity examples that well fitted other times.

The truth is that for his soul salvation and memory Gil Eanes seems not to have been concerned about efforts and money once he commissioned the most important artist of the time in Portugal, Diogo de Contreiras. Is exactly one of the boards of that altarpiece that is now offered for sale. Depicting the Resurrection. On that work the painter follows the model of Christ standing on the Tomb, that later again will execute, circa 1555 at Atouguia da Baleia, placing in perspective the slightly opened tomb with roman decoration and a stout soldier on the front, filling the entire bottom right. As stated by Joaquim Caetano the result is a huge prolongation of the picture space, with a beautiful landscape ground where there are visible in the left and the right two complementary scenes, respectively Saint John and the Saint Women siting the Tomb and Resurrection Appearance to Mary Magdala. The three soldiers fits on a corner of the painting, one back to the viewer (a typical feature of Contreiras work), another in profile with a halberd and the last one standing with the rich military uniform, roman armor, fine helmet and a beautiful gilt sword. This placement dignifies the Christ figure, young and almost puny, holding a gothic cross in the military order of Tomar way, where Gil Eanes were commander. Dominating of bluish green tones, the painting is punctuated, is Contreiras very much way, by intense red spots, in Christ drapery, the shin guard of the soldier at the front, the cape of the farthest soldier and the Saint John figure at the left, showing the elegance and chromatic restraining of the painter. Contreiras is capable of free brushstroke but also of immaterial placing of the color, plain and homogeneous surfaces such as the face of the Tomb, or the legs of the soldier on the front, showing a remarkable quality of resources.

This remarkable work of art is now offered to collectors that want to enrich their collections with a secure and delightful investment, being the last one the main purpose of the art lovers.
Anísio Franco