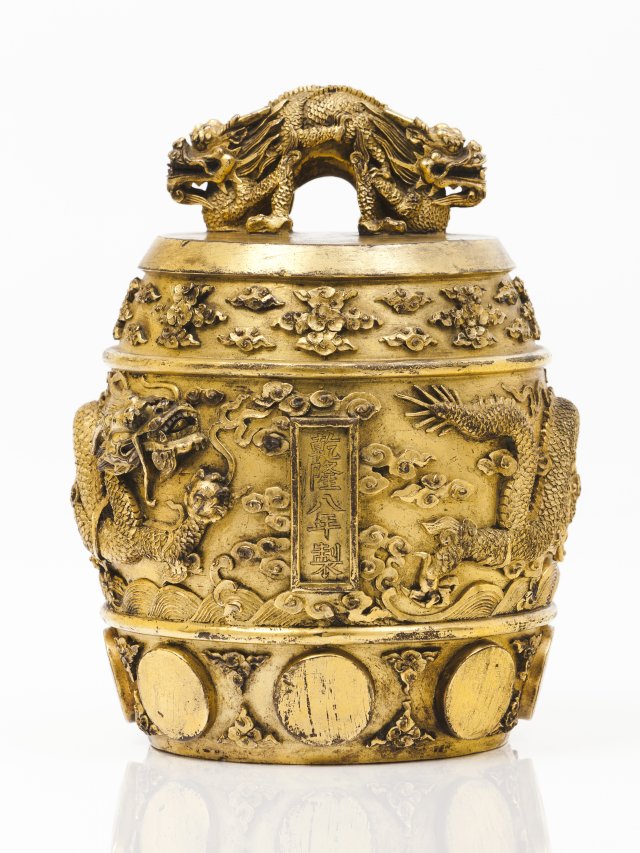 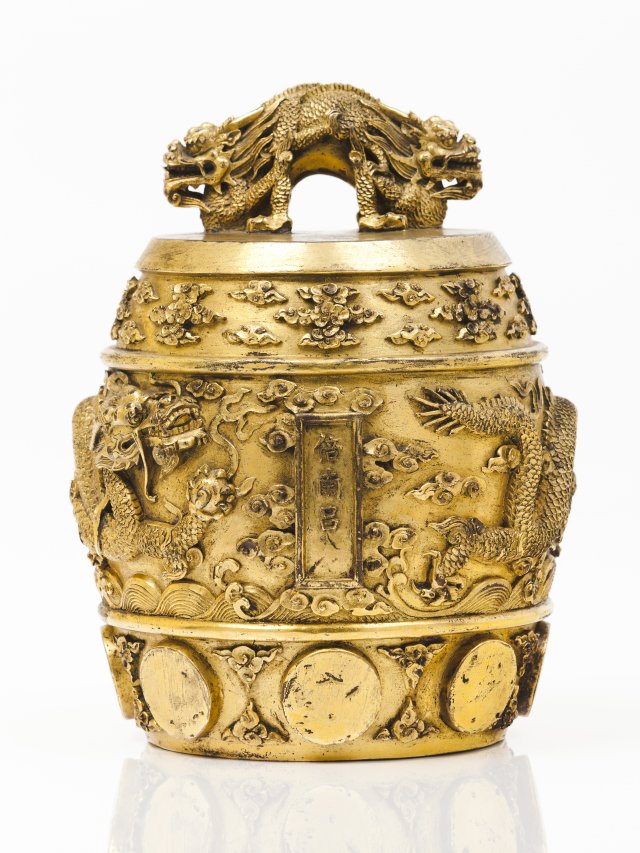 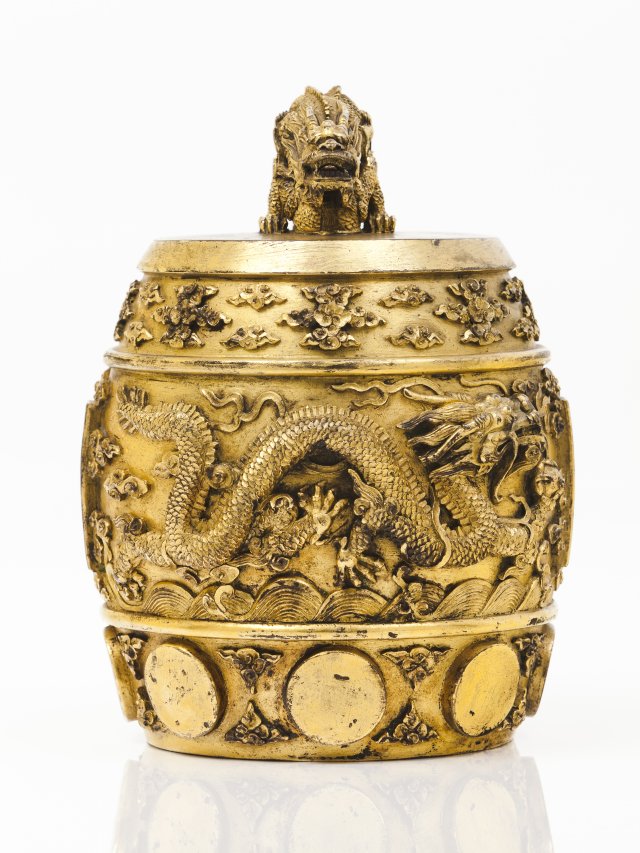 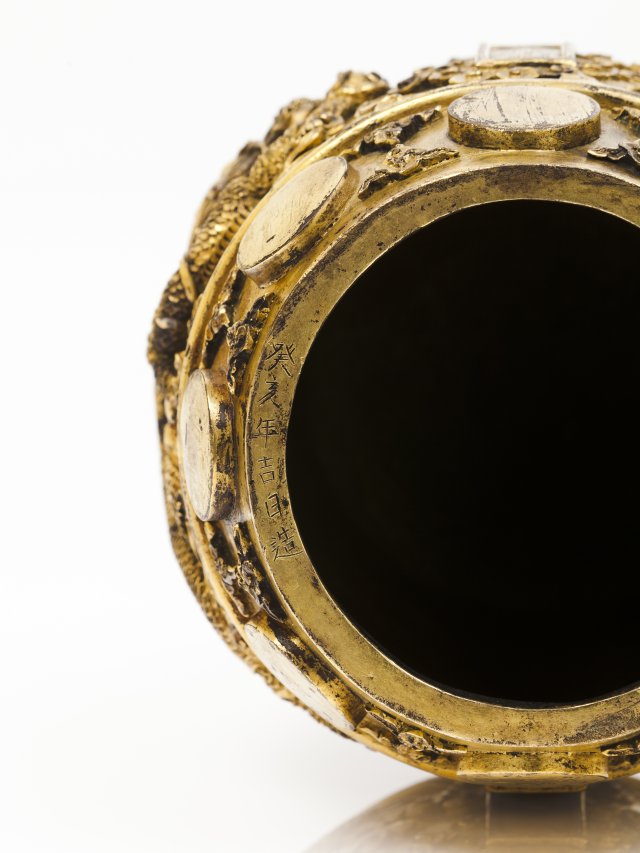 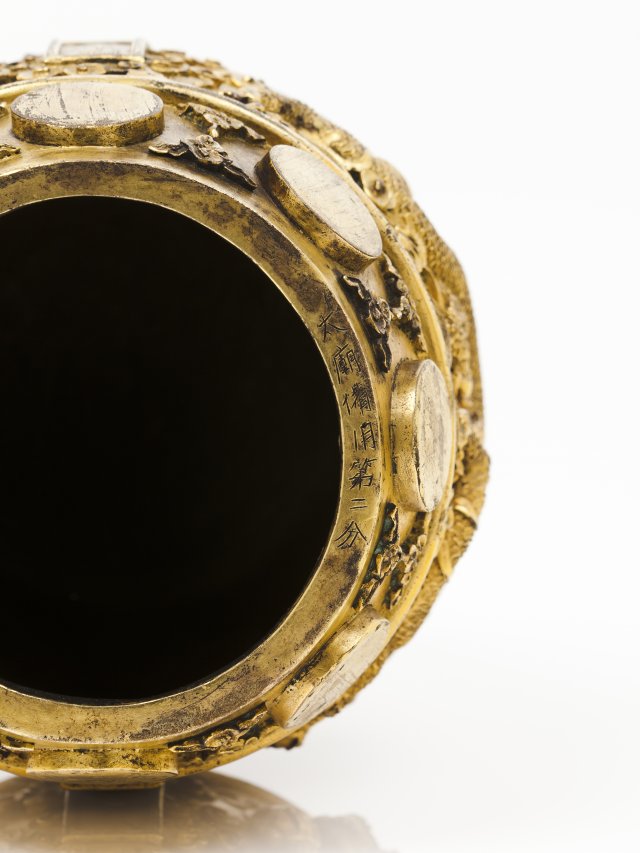 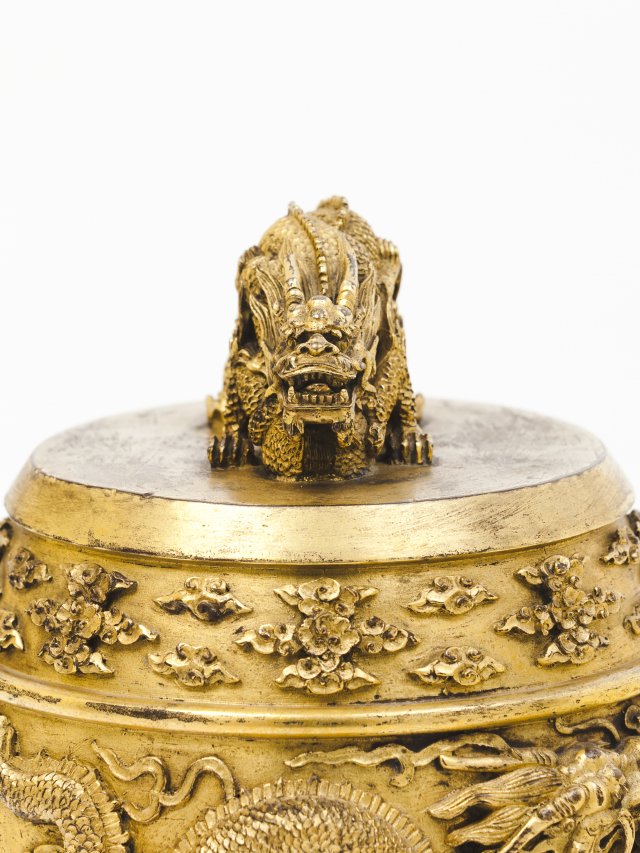 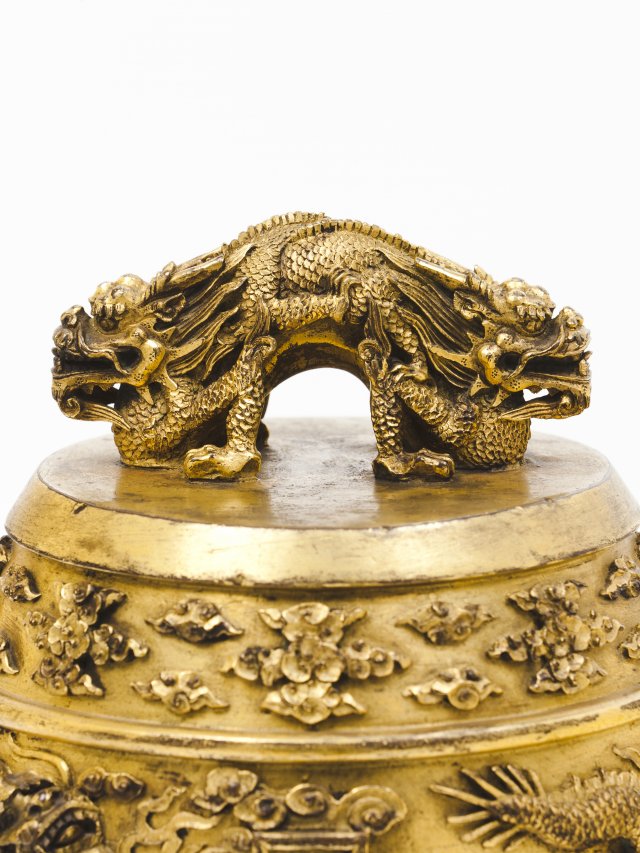 Gilt bronze
Cast in barrel shape with relief decoration
Central band depicting two five claw dragons holding pearl, while overflying waves amongst clouds and flames, with two inscribed rectangular cartouches identifying the musical note produced by the bell – “倍南吕” (beinanlu - low octave of the tenth note) – and dating it – “乾隆八年制” (made in the eight year of the Qianlong reign – 1743)
Upper band decorated with frieze of stylised clouds and lower band with clouds and eight medallions
Surmounted by two intertwined dragons forming the suspension hoop
Base inscribed “太庙备用第二分” (The second piece reserved for the Emperor's Ancestors Shrine) and “癸亥年吉日造”(made in the auspicious day of the year of Guihai)
Qianlong reign, dated 1743

Notice to bidders: Bidding in this lot will require a 20.000 euros bid deposit.

Bidding in this lot will require a 20.000 euros bid deposit

The history of bronze bells in China can be traced back to the Western Zhou dynasty (1050-771 BC), where they were used as ritual instruments during important state events. 1.

Bells of this type were known as bianzhong and were grouped together in sets of sixteen and hung from ornately carved lacquer wood stands. The set of bells comprised of twelve musical tones and four repeated notes from higher and lower octaves.

Jade musical chimes were also grouped in sets of sixteen and hung from similar stands and were used together with sets of bells outside halls during state events such as the emperor’s enthronement, sacrifices and state banquets. 2.

The different notes or tones were created by the thickness of the casting of each individual bell and these were arranged in their thickness of casting. Their sequence is as follows: Huangzhong (1st), Dalu (2nd), Taicu (3rd), Jiazhong (4th), Guxi (5th), Zhonglu (6th), Ruibin (7th), Lingzhong (8th), Yize (9th), Nanlu, Wushe (11th) and Yingzhong (12th).

Each bell has its tone inscribed to the side within a rectangular panel which, in this bell, is the beinanlu tone, the low octave of the tenth note. The inscription to the other side of the bell is a date, Qianlong Banian - the Eight Year of the Qianlong reign (1743). The lower edge of the bell is engraved with an inscription: The second piece reserved for the Emperor's Ancestors Shrine and made on auspicious day in the year of Guihai.

This bell is somewhat striking in its appearance with the handle cast as a fierce double headed dragon. Double headed dragons handles of this style can be seen on imperial jade seals of the Qing dynasty and thus have an immediate connotation of imperial power and authority.

The central band of this barrel shaped bell consists of two lively five-claw dragons clutching pearls above breaking waves amongst cloud scrolls. The form and decoration of this bell follows an earlier Kangxi prototype, which is very similar. However, there were also sets cast with trigrams rather than dragons.

During the Qianlong period, sets of bells were also cast with wider shoulders and have a broader form, which had the addition of two thin bands of scrolling foliage bordering the central dragon band. There are also two variations of these wide form bells, one with a series of raised circular bosses and a dragon tortoise and another with trigrams. Both have deviations of the dragon suspension handles.

The depiction of bells in use during state ceremonies at the Qing dynasty Court can be seen in a painting by Giuseppe Castiglione (Lang Shining) entitled Imperial Banquet in Wanshu Garden, dating to 1755.

The Qianlong Emperor accepted the idea that music and politics were closely related and that he needed to establish an appropriate ‘Chinese’ tradition and pursue ‘proper’ music in order to achieve dynastic legitimacy. 3. Thus he commissioned the musical treatise the Yuchi Lülü Zhengyi Houbian, which was completed in 1746 and continually revised until 1786. It provides an accurate portrait of how Qianlong's musico-political thought developed over the course of his long reign. 4.